It is important to note the various complications which can arise from the disease, which has a series of serious co-morbidities. These can range from increased risk to infection, cardiovascular disease and even neuropathies (nerve damage across multiple tissues) – each of which present their own challenges to tackle.

So here’s a review of recent developments, to include developments in Insulin, the growing MedTech field and how Cell Therapy is also tackling the disease. 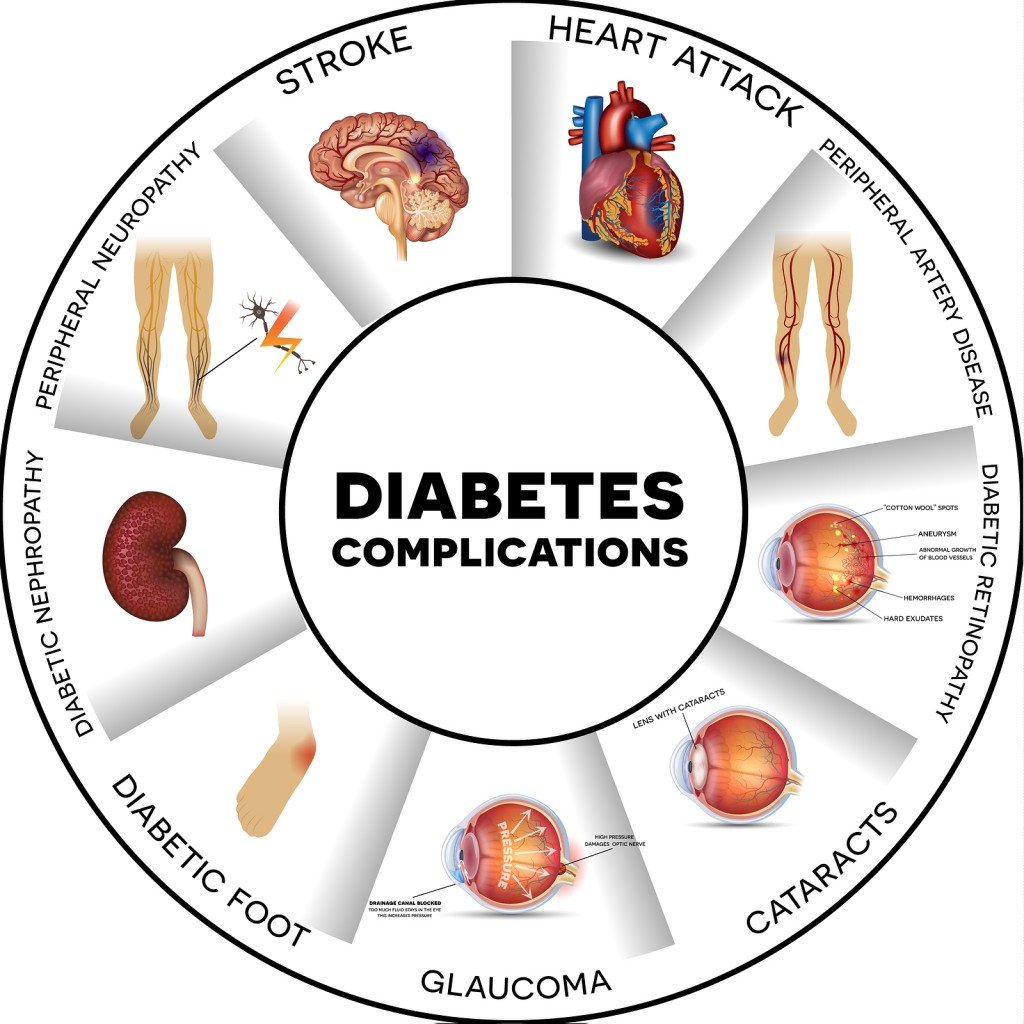 Insulin was the first human recombinant protein to be approved on the market under the brand Humilin. It was initially developed by Genentech and marketed by Eli Lilly in 1982. This was a massive step forward to replace pig insulin and improve the life of diabtics worlwide. Since then, the recombinant insulin never stopped being improved.

Enhancing existing insulin treatments and Metformin have been the first line-of-treatments in tackling Diabetes (type I and type II respectively).

Although treatments vary between types, generally improving on synthetic insulin is through either increasing the absorption rate of synthetic insulin, new formulations (analogs – e.g. Lantus) or introducing biotechnological enhancers, such as BioChaperones. One example of the latter is the French biotech Adocia’s Biochaperne Lispro, which went on to be licensed by Lilly in 2014.

Additionally, other treatments once-daily human analogues of the naturally occurring hormone Glucagon-Like Peptide-1 (GLP-1), which only stimulates the release of insulin when glucose levels become too high.

Many are working on these GLP-1 analogues as treatment for Diabetes, particularly of type II – from Novo Nordisk’s Diabetes Care Unit, to Sanofi (partnered with Denmark’s Zealand Pharma) and GSK etc.

The general principle here though is to combine these therapies with insulin analogues, to maximise the effect. However, one of the main challenges in diabetes care is a sustainable and reliable drug delivery.

Fig. 1 – Protein #engineering has been used to produce variant forms of insulin, known as insulin analogues, with modified amino-acid sequences and improved pharmacokinetic properties. A number of insulin analogues have now been licensed for treatment, including rapid-acting forms for use at meal times and long-acting insulins for basal requirements.

MedTech: The Solution to Needle-Free Digitisation of Diabetes?

A big emphasis in the industry has been to find needle-free methods for delivery, given the obvious discomfort and hassle the repeated use of needles can cause (compliance, mistake of medication).

Over the last decade, an increasing number of drugs, from hormonal contraception to anti-smoking aids, have become available as transdermal drug delivery systems (TDDS). These are non-invasive patches which allows a drug to be absorbed through the skin.

The Japanese Biotech, Nitto, is developing an example of a TDDS system, called PassPort. However, the PassPort system is not yet being investigated for insulin delivery (Source: Nitto)

For insulin delivery, one example is Prometheon Pharma which has developed the TruePatch, a multi-day basal insulin patch. Patches can also be problematic and irritating (e.g. cosmetically).

So another approach is the Intarcia implant from Boston (the Medici Drug Delivery System) which is partnered on with the French pharma Servier. This is a futuristic matchstick-sized intra-dermal pump which has undergone three Phase III trials in conjunction with a GLP-1 agonist (exenatide).

Ultimately, if approved, the ITCA 650 system (pump and GLP-1 formulation) would represent the first injection-free therapy capable of delivering up to a full year of treatment from a single device. Regulatory filing in the US is projected for later this year.

There’s also whole range of monitoring tech out there designed to avoid the use of lancets to test glucose levels. These include GlucoSense (a spin-out company jointly formed and funded by NetScientific and the University of Leeds) which uses laser technology, and NovioSense (a Dutch start-up in Nijmegen), which is a 15 mm-long metal coil which uses tear fluid to measure glucose.

On the other hand, Gluco-Wise is a new product from MediWise (in London), which is also an optical reading device designed for the ear-lobe. There is also the hotly discussed Google Lens which is being developed in conjunction with Novartis. Trials are due to start for the lens this year (read more via IEEE Spectrum), however, it’s not so clear whether this is a lot of ‘hot air’, as one ex-Verily employee leaked.

Roche is also making progress in its Diabetes Care Unit. It has struck a deal with the MedTech company Senseonics to sell an implantable glucose sensor in some major European countries.

With an app, patients then can access real-time glucose measurements. The software also predicts the ‘wobble’ in glucose levels, so that patients can take steps to stay in control if they were near to developing a hypo or hyperglycaemic episode.

Implanted under the skin in the arm, the sensor antenna receives radiofrequency energy from a smart transmitter (left) and the indicator polymer on the sensor’s surface fluoresces when glucose temporarily binds to it (Source: Senseonics)

Automated pancreatic simulation is an interesting alternative to the standard insulin injections, as these might not always best match the rapid changes in blood glucose throughout the day. In addition to an intradermal pump, Cellnovo’s mobile system comprises a handset, from which the patient can control the pump.

A research team from the University of Cambridge has also managed to develop a closed loop beta-cell based insulin delivery system for diabetes type I. This bionic pancreas prototype has been constructed for human trials using an iPhone app which monitors blood glucose levels.

The iLet by the Boston Group (Source: Bionic Pancreas Project) and a generic model of the components to a bionic pancreas (Source: Barabara Davis Center)

A similar research development has been made by Boston’s Bionic Pancreas project which completed its 22-day outpatient trial in April last year. In collaboration with Boston University and Massachusetts General Hospital, the Bionic pancreas has been branded the iLet.

This kind of system has also been scrutinised by the ‘Biohacking’ community and even parents – particularly in the States, where this kind of MedTech could potentially be too far-off from regulatory approval, or too costly for some patients.

But is Cell Therapy the Ultimate Cure?

Bolstering up dysfunctional tissue with transplant tissue to enhance insulin production is also a popular area of development.

Along with other attempts to create islets in the lab (and bypass the problem of donor shortage), these procedures seem to be the future of treatments for type 1 diabetes. On this front, the DCTI is even partnered up with some biotechs, including the well-known Galapagos. 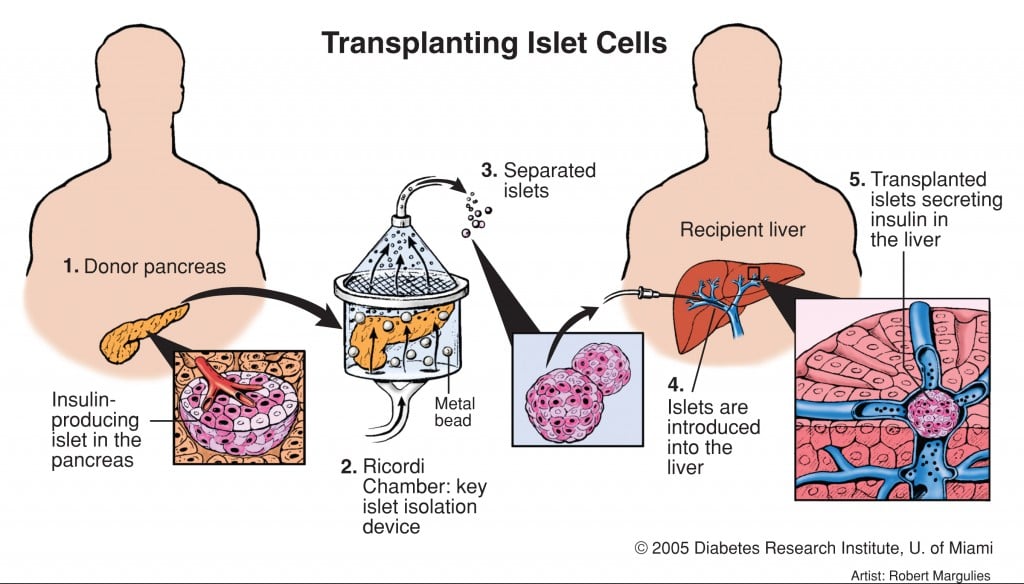 Islet transplants have actually already been around for a while though. In 2000, patients in a trial were able to stop their daily insulin injections after successful transplants – which sounds like the end of Diabetes altogether!

But not so fast. The problem was, that although transplantation does technically work, donor islets tend to fail in insulin production overtime, which is why the DCTI is looking to optimise pancreatic islet isolation from donors. Therefore, different surgical and transplant methods have been investigated to improve islet transplantation.

Which brings me to news we just covered yesterday; a new surgical method using part of the stomach cell lining has resulted in the successful ‘cure’ of a patient at a hospital in Milan. This is the first example of successful proof-of-concept of this kind of Islet transplant technology in Europe, which was developed at the Diabetes Research Institute (DRI) at the University of Miami.

So is this the end?

So there we have 3 broad areas in which Diabetes is being tackled in Biotech; New analogues for insulin and insulin-stimulating hormones, improved delivery and monitoring of existing therapies, and lastly – Cell therapy.

It is by no means an exhaustive list of all those working in Diabetes, but will hopefully bring together some of the angles which the field is approaching the disease. And with some of these trials reaping dramatic results, it’s encouraging to keep the scale of how much has been already accomplished in mind.

However, there is much left to still work out, and with patents expiring and many trials still in early stages, it would be overly optimistic to say we’ve made it just yet.

We don’t recruit… We help you to buy a team !

We want to make our website more user-friendly and continuously improve it. If you continue to use the website, you agree to the use of cookies.Accept Reject Read More